It is widely expected the Bronny James, the eldest son of the Lakers superstar LeBron James, will enter the NBA in 2024 as a draft pick. At this time NBA Draft Room projects him to be a second round pick at number 39 overall.

Draft expert Jonathan Givony shared the impressions that the scouts around the league have on the 18-year-old guard who is set to enter college next season.

“They like the shooting, he can come off screens, he’s really improved that part of his game, he’s got deep range on it, he’s starting to experiment with deep pull-up threes which is interesting so he can play off the ball some too which is interesting,” Givony said on Ball Related podcast.

“They like his defense. He’s a really intense, really smart, really committed defender. I’ve seen his team lose a lot of games, honestly, but the energy never stops with hi which is great.

“And he also plays this really unselfish, really intelligent style of basketball where you could see that he grew up around the game and he’s comfortable in his own skin and he doesn’t try to do too much.”

According to Givony, Bronny needs to work on his pick and roll game. He noted that the player is taking his time to study the game and is not just riding on being the son of an NBA superstar.

“I think that people like his game,” Givony summarized. “You have to separate him from his dad because he’s obviously such a different player. It’s such a different physical profile: he’s not six-eight, he’s not 260 pounds, he’s not one of the best athletes of all time to play any sport. I think he’s got a great future ahead of him.” 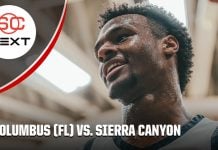