Ja Morant is one of the brightest young stars in the NBA. The 23-year-old point guard took a big step forward this past season in terms of individual statistics.

From averaging 19.1 points, 4 rebounds and 7.4 assists per game during his sophomore year the Grizzlies star improved to 27.4 points, 5.7 rebounds and 6.7 assists last season.

Morant feels like his opponents respect his game now, but some players still don’t like him because he speaks whatever he wants and because of that he destroys them on the court.

“Just because I’m me and I speak on whatever I want to and say what I’m feeling at the time that some people don’t like me. So that’s why I bust their ass,” Morant said on The Pivot. 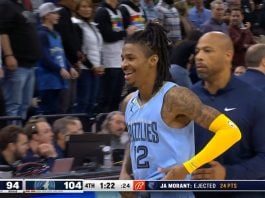