London Lions are not entering this season’s EuroCup to make up the numbers.

The EuroCup will be London’s first venture in the second tier of European club basketball, having reached the second round of the FIBA Europe Cup last season.

The game-changing signings also showcases the side taking advantage of the removal of the British Basketball League’s salary cap ahead of the domestic campaign, being able to build a competitive team in addition to having a BBL roster.

The signing of former NBA forward Sam Dekker is one of London’s biggest statements of intent.

Dekker, who averaged 13.2 points and 5.5 rebounds in the Turkish league for Bahcesehir last season last played in London as a member of the Washington Wizards, as he hit 10 points in his side’s win over the New York Knicks at the O2 Arena in January 2019.

“That combination of size, physicality and skill are what really stand out when you watch his film. I think he’ll provide us with a low post presence as well as an anchor defensively with his ability to guard the pick-and-roll as well as rebound. Aside from his on-court talent, his leadership qualities will impact our team from day one.”

Alongside his NBA career, Koufos has EuroLeague spells with CSKA Moscow and Olympiacos.

Luke Nelson also heads to the Lions having created a successful career around Europe.

A mainstay with the Great Britain national side, Nelson returns to England after a nine-year absence, domestically. Before he went to UC Irvine, the guard played for the Reading Rockets in the National Basketball League.

A one-time Worthing Thunder junior, Nelson introduced himself to the global stage for England’s U18 side during EuroLeague’s Adidas Next Generation Tournament in London in 2013.

Nelson averaged 15.7 points, 5.7 assists and 2 steals for the national team, playing against some of the best junior teams in Europe.

Schmidt said: “I’m looking forward to building our roster and beginning the work it will take to win domestically in the BBL as well as in EuroCup.” 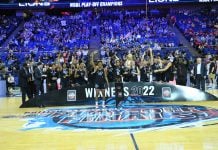 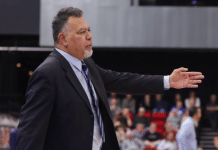