“At the end of the day, you look what he’s done in his career, and … it’s unbelievable,” he added. “That’s all you can say. So, Magic’s not far off. What he’s pushing for, the league should want to do that for him.”

“The players should want to do it because again, he set the stage.” 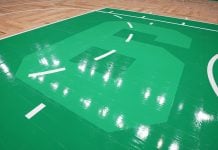 LOOK: Celtics places No. 6 in parquet paint as part of honors for late great Bill Russell

LeBron James will continue to wear No. 6 despite NBA retiring it to honor Bill Russell

Jamal Crawford on Bill Russell: “Our friendship has grown over the past few years”