LEXINGTON, United States of America, August 2, 2022/ — Ugonna Kingsley Onyenso (ooo-GAH-na ON-yen-so), an imposing frontcourt player in the 2023 class, has signed with the Kentucky men’s basketball program and will reclassify to join the 2022-23 roster.

He is now the fourth first-year player to sign with the Wildcats for the upcoming season, joining Chris Livingston, Adou Thiero and Cason Wallace.

“What excited me most about Ugonna is he wanted to not only be here but wanted to be here to train with us and learn from guys like Oscar (Tshiebwe) and Lance (Ware) immediately and help us chase a national title,” UK head coach John Calipari said. “Ugonna has unbelievable natural athleticism and great instincts for a young player. He is going to be able to defend at the rim and is a terrific finisher. Ugonna has only been in the United States since January but has been fully immersed in basketball for several years with his experience at the NBA Academy in Africa. The staff and I are excited to help push him every day in a competitive and focused environment as he continues to improve and become the best version of himself both on and off the floor.”

Onyenso is a 6-foot-11, 225-pound big with the size and speed to wreak havoc in the paint on both ends of the court. His frame allows him to impose his will in the paint, and he has the potential to develop into an elite rebounder and shot blocker with terrific natural instincts.

“I’m proud to join the Kentucky basketball family and I can’t wait to help work for a national championship,” Onyenso said. “I’m so comfortable with Coach Cal and the staff and I know they will help me reach my goals as long as I work hard and come to play every day. I’m excited for their positionless style of play and I know I’m going to continue to get better because I’ll be pushed every day in practice with players who have the same drive that I do. I can’t wait to get to campus in August and get started.”

The Owerri, Imo State, Nigeria, native spent this past season at Putnam Science Academy in Connecticut, the same program that former Wildcat Hamidou Diallo hailed from. With his reclassification, Onyenso is ranked in the top 35 by Rivals in the 2022 class and in the top 40 by 247Sports. He was rated in the top 25 by both outlets while in the 2023 class.

He joined Putnam in January and the squad was a perfect 20-0 with Onyenso on the roster. He averaged 11.4 points, 9.0 rebounds and 5.7 blocks per game. Onyenso shot 64.4% from the floor and had five games with at least 10 blocked shots. The highlight of his season was a 24-point, 11-rebound and 11-block triple-double.

Playing at the NBA Academy Games this summer, Onyenso scored in double figures in each of the six games he appeared. He averaged 13.2 points, 9.2 rebounds and 2.7 blocks per game, while also connecting on 64.4% of his field-goal attempts. Onyenso was particularly good on the offensive glass, registering 32 total boards (5.3 per game) on that end.

He is one of the youngest players ever to make the senior men’s Nigerian National Team. Onyenso made his debut with the team at the FIBA Basketball World Cup 2023 African Qualifiers in November of 2021. He scored 10 points on 5-of-8 shooting and had four rebounds and two blocks in 16 minutes in a 96-69 win over Uganda. 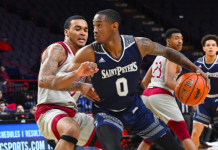 Louisville reportedly not an option for the Raptors; team still hopeful they can play in Toronto

Kentucky AD: There will be consequences for fan yelling racial slur

Bronny James, 15, has an offer from Kentucky, 4 more colleges interested