“This is definitely impressive. But, to use our players’ phrase. ‘We deep.’ We’re deep. It’s as simple as that. I think we say that not arrogantly, we say that confidently because anybody that steps out on the floor can make an impact for us. To see what Tyus Jones is doing right now. What Jaren Jackson’s doing. Steven Adams having been out for a good portion of the playoffs, and coming back in and making a statement. Guys off the bench. A lot of different guys stepping up. It’s really impressive. No matter who’s out. Ja’s out. Anyone else goes out. Our guys rally, compete, and tonight was a big win for us.” 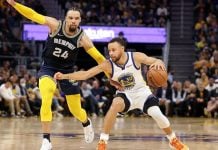