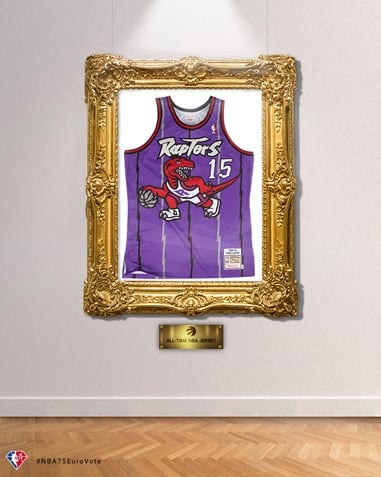 The 1998-1999 season Toronto Raptors jersey was designated as the ‘All-Time NBA Jersey as voted for by European fans and panelists in the second category of the NBA 75 Euro Vote among a selection of some of the most iconic jerseys in NBA history pre-selected by a blue-ribbon panel of European media, influencers and celebrities. Following a one-week voting period, the 1998-1999 season Toronto Raptors jersey obtained 18.8% of all votes, followed by the 1995-1996 season Chicago Bulls jersey (14.1%) The fan vote accounted for 50 percent of the results while the panel made up the other 50 percent.

See below the final voting breakdown

The NBA 75 Euro Vote pays tribute to current and former European players who have inspired generations of basketball fans across the continent.  During the 2021-22 season, a blue-ribbon panel of European media, influencers and celebrities will join fans from Europe in voting for the 10 best European players of all-time who will make up the All-Time NBA European First and Second Teams.  Panelists and fans will vote from a list of players born or raised in Europe, from the early pioneers to current superstars.

How the Raptors can win Game 6 vs. the 76ers