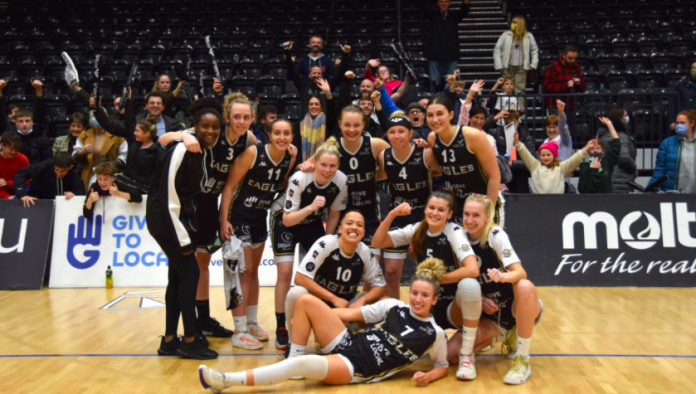 Newcastle Eagles – who advanced to last season’s WBBL Playoff final as the unfancied seventh seed – will square off against the London Lions in the WBBL Cup final on January 30 in a rematch of last season’s post-season climax.

For the Lions, they are undoubtedly the favourites again, having assembled a squad suited for EuroCup Women competition with more than enough size, skill and depth that has proven too much for WBBL sides so far, including the Eagles, who lost 100-45 in late-November.

But for the Eagles, that result will not enter their minds. The WBBL Cup final will be a new game and on a bigger stage. They will not be fazed by the occasion and, as underdogs, they have nothing to lose.

Teams with nothing to lose often play better anyway. And this Eagles team is fun to watch.

However, their exciting brand of team basketball took a back seat against the Leicester Riders in Saturday’s WBBL Cup semi-final. This time, the ‘Eagles Lasses’ were forced into a defensive battle where fighting spirit was in order.

In the end, an 8-0 burst from the Eagles, inspired by Chloe Gaynor, who scored six of those eight points helped the Eagles to a narrow 44-43 lead with 3:23 remaining.

And that run was a game-changer. Leicester – who were the better team for large portions – came unstuck and only managed two points in those last 3:23 with Newcastle rejuvenated.

A low-scoring affair but the Eagles booked their ticket for the WBBL Cup final in Birmingham with a 50-45 win. Ebony Horton, who is averaging 22 points this season, led the way with 19.

On the other side, the Lions reached the WBBL Cup final by ruthlessly ending the Sheffield Hatters’ unbeaten start in their semi-final.

London 2012 Olympian Jo Leedham-Warner starred with 27 points, seven rebounds and five assists for the Lions in a convincing 100-66 win over one of the WBBL’s most successful sides.

Going into one of the more eagerly anticipated games of the WBBL season, both sides were 7-0 in all competitions with double-digit wins featuring heavily in those records.

London though raced clear and their 27-11 lead after the first quarter effectively crushed all pre-game anticipation as the Lions showed their strength in all aspects on the court.

“We got out early and controlled the game. It was great to get quality minutes into Jo [Leedham-Warner], she was impressive. Azania [Stewart] is just continuing with the momentum she has and that’s really pleasing for us looking forward.”

And looking forward, a dream EuroCup second round tie against Leedham-Warner’s old side, Bourges Basket beckons for London.

But in that schedule, the biggest game of the WBBL season so far is on the horizon against the fearless Eagles.