Kyle Rittenhouse, who was accused of first-degree homicide among other counts after a night of race-fueled riots in Kenosha, Wis., was acquitted of all charges on Friday, via The Federalist.

Former first overall pick in the NBA, Kwame Brown, says Rittenhouse acted in self-defense and goes on to say the case was politicized by people who make a lot of money promoting racism even at the expense of a teenager: 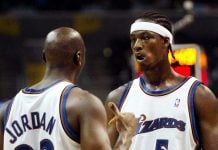 Seth Curry talks on his future with the Philadelphia 76ers