Former first overall pick in the NBA, Kwame Brown, shared his thoughts about Anthony Davis and Dwight Howard who got into an argument on the Los Angeles Lakers’ bench and had to be separated by teammates on Friday night, via ClutchPoints:

“You’re not running up on no god d–n rookie,” said Brown directed at the Lakers star. “You running up on a grown a– man. What I saw was a man trying to assert his leadership, but he did it like a boy. The moment you’d walk up to me and you put your hand on my chest, hitting my chest. We ain’t talking about basketball no more.” 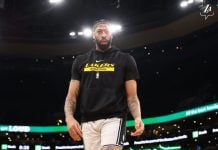