The first game of the Lakers Big Three playing together ended with a loss to the Warriors (99-111). It was the fifth straight loss in preseason for the purple and gold. Anthony Davis led the Lakers in scoring with 20 points. He also had 6 rebounds and 2 assists in team-high 30 minutes of play.

Following the defeat, AD shared his thoughts on the first time of the Big Three playing together and areas that can still be improved.

“We saw some great things with me, Bron and Russ in actions,” Davis said postgame. “There’s endless possibilities of what we can run what we can do, especially with shooters on the backside with Mel and Baze and all our shooters. It’s still an adjustment.

“We’ve done a lot of practice but first time playing together on the floor tonight. Even though there was good thoughts, a lot of things we can do better. Still we can work on our defense schemes as a unit. Even though we have the same schemes, there are new players in it. The way they’re playing defense we are trying to adjust as a team. It looked good. We got another shots at a game on Thursday.”

LeBron James on Austin Reaves: “High IQ kid, and he has a lot of dog in him” 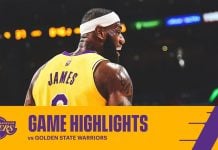 James Worthy on Lakers Big 3: “They showed a little bit of what we hope to see”

Chris Broussard: “Miami, not the Lakers, had the best offseason by...