The Los Angeles Lakers were defeated for the fourth straight time this preseason after losing to the Phoenix Suns by 29 points (94-123). Anthony Davis was the top performer for the hosts with 19 points, 3 rebounds and 6 assists in 28 minutes of play.

Despite yet another loss, the 28-year-old star forward is not concerned for the season, as the team is still in the early stages of learning to play together. According to him, the Lakers showed some signs of how good they can be in their latest loss.

“We saw flashes of what we can be on both ends of the floor,” Davis said after the game. “Obviously we’re missing one of our key pieces and we’ll get a chance to see how that looks with everybody except Talen a Malik on Tuesday. We showed some good things.

“We’re still trying to figure out, like Melo said, rotations and work through the kinks of defense and guys get on the same page. Just the game i played with Russ. Just trying to get used to him. He’s trying to get used to me. Then be a totally different story come Tuesday. And now Bron playing, all three of us. Melo playing the five, play at the fourth for two games.

“So we’re just trying to figure it out. That’s what preseason is for. Feeling that’s what film is for and we’ll go through it and be prepared come the 18th, 19th, whenever my opening night game is.” 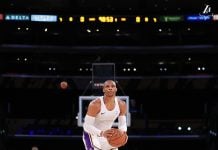 Lakers roster breakdown: Looking at all 19 players for training camp...

Kevin Durant excited about preseason debut with the Nets