As basketball heads, we are all aware of the Jordan brand. The first thing we notice is the Jumpman logo, a symbol worn by millions of fans around the world. Well, that logo is the subject of a court case at the moment.

The most successful sneaker franchise of all time is being sued as a photographer is accusing Nike of using his shot of the iconic Jordan logo.

Jacobus Rentmeester is suing Nike in federal court in Oregon for copyright infringement. Not only is he asking for profits associated with the Jordan brand, which generated $3.2 billion in retail sales in 2014, but he also is seeking to halt current sales and plans for the brand’s future.

Rentmeester says he took a picture of Jordan in his Olympic warm-ups in 1984 for an issue of Life Magazine. After it was published, Nike’s Peter Moore, who designed the first Air Jordans, paid $150 for temporary use of Rentmeester’s slides. Rentmeester says Nike used his photo to recreate the shot with Jordan in Bulls gear with the Chicago skyline in the background, but that it was essentially still his work.

“Mr. Rentmeester created the pose, inspired by a ballet technique known as a ‘grand jete,’ a long horizontal jump during which a dancer performs splits in mid-air,” the lawsuit says. “The pose, while conceived to make it appear that Mr. Jordan was in the process of a dunk, was not reflective of Mr. Jordan’s natural jump or dunking style.”

The suit claims Rentmeester directed Jordan, who practiced the desired leap, an unnatural move for the star because he typically held the ball with his right hand. Jordan, the suit claims, backed up the idea that it was indeed a ballet move in a 1997 interview with Hoop Magazine. 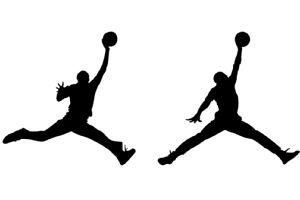 Rentmeester said that in March 1985 — after threatening to sue the shoe and apparel brand — he granted Nike use of the Jordan logo for two years on billboards and posters in North America, for which he was paid $15,000. The Jumpman image also was featured as a tag on the Air Jordan I shoes, which sold for $65 a pair.

The Jumpman logo first appeared on the Air Jordan with the third version in 1987, the first shoe conceived by legendary designer Tinker Hatfield. The company has since trademarked various versions of the logo — in 1989, ’92 and ’98.

Dallas Mavericks owner Mark Cuban has gone public by saying that fans voting for the All-Star Game is wrong and wants the voting to go back to coaches and general managers.

Opinion: What Cuban forgot to realise is that fans were given the chance to vote for EVERY player in the league, not the usual 60 percent that is available.

“In context of everything, that’s no votes,” Cuban said. “That’s such a small number considering all the different options you have to vote that it’s almost embarrassing. It’s just no one’s really looked at it that way. … I mean, think about it. Of all the people who go to games, all the people who watch games globally, to have [1.5] million means that system’s broken. Absolutely, positively broken.”

Cuban, who also thinks All-Star rosters should be expanded a couple of spots for each conference, suggests allowing coaches and/or general managers to vote for the starters as well as the reserves each season.

Cuban’s issue isn’t as much the results of the fan voting, although he did sarcastically ask if Yao Ming or Tracy McGrady were All-Star starters this year, a reference to the oft-injured former Houston Rockets stars getting big boosts due to their popularity in China in the past. His concern is the relative lack of interest in the balloting.

“They go hand in hand,” Cuban said. “We have that few votes, you’re going to get one team or one player or one part of the world that skews everything. Again, if we were getting 20, 30, 50 million votes, which shows that fans just love it and wanted to participate, that’d be one thing. Then the fans have spoken.

“But when the number of voters isn’t enough to even get anybody to notice … That means basically .01 percent of NBA fans cared enough to vote, and that’s saying every fan voted just once. Probably, if you include global, that means .00001 percent of fans thought enough to vote. That just shows nobody cares.”

Dwight Howard does attempt three-pointers, just very rarely in games. Well he had no choice in the early stages of their 113-111 win against the Phoenix Suns. 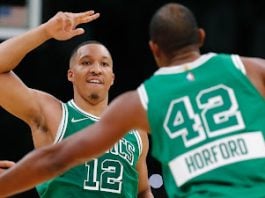