The Los Angeles Clippers are reportedly prepared to sign point guard Yogi Ferrell later next week when he clears health and safety protocols, according to Shams Charania. His contract will be a 10-day one.

The 27-year-old guard most recently played for the Salt Lake City Stars of the NBA G League. Prior to that, he was on a 10-day contract with the Cleveland Cavaliers.

Ferrell, who entered the NBA undrafted in 2016, is averaging 7.8 points, 2.1 rebounds and 2.3 assists per game during his career. 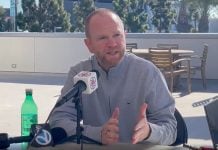