NBA All-Star 2021 will feature the game and skills competitions on one night for the first time on March 7, the league announced.

The NBA and NBPA are committing more than $2.5 million in funds and resources toward Historically Black Colleges and Universities (HBCUs) and support and awareness around equity and access to COVID-19 care, relief and vaccines.

The All-Star Game will feature the following:

The game will feature the same format as last year, with the teams competing to win each quarter and playing to a final target score of 24 in Kobe Bryant’s honor during the untimed fourth quarter.

Two team captains will select from the pool of players voted as starters and reserves and make their picks without regard to conference affiliation.

Captains will be the All-Star starter from each conference who receives the most fan votes per conference, which will likely be Kevin Durant and LeBron James.

The vote totals and starters will be announced tonight, with an All-Star draft date still to be determined.

“NBA All-Star in Atlanta will continue our annual tradition of celebrating the game and the greatest players in the world before a global audience,” said commissioner Adam Silver. “In addition to the festivities on the court, the All-Star Game will honor the vital role HBCUs play in our communities and focus attention and resources on COVID-19 relief, particularly for the most vulnerable.” 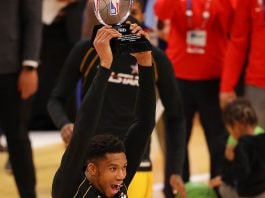