Real Madrid had a tough night against Panathinaikos, getting another home win against the Greeks, 76-66, on Wednesday night (27/1). The hosts had a 22-point lead in the first half with Panathinaikos taking it down to 5 points in the second half putting some pressure on the hosts. Real Madrid, survived Panathinaikos’ pressure, scored some big buckets and got a ten point victory in Madrid.

Grabiel Deck was the top scorer for Real Madrid with an almost double-double, having 20 points while Carlos Alocen added 13. For Panathinaikos, Nemanja Nedovic was again the top scorer with 18 points with Zach Auguste adding another 13.

All Gabriel Deck and Jeffery Taylor in the first quarter

With both teams starting strong on defense, Panathinaikos returned on the game pretty quickly despite Real’s 5-0 lead. Madrid run a 7-0 score to extend their lead to 8 points (12-4), after playing great defense, stealing the ball and scoring easy baskets. The hosts registered their first double digit lead, after an impressive dunk by Edy Tavares (18-8) and three minutes until the end of the quarter remaining. With Jeffery Taylor and Gabriel Deck already having 8 and 10 points respectively, Real Madrid ended the first quarter leading by 13 points (25-12).

They couldn’t keep up with their rhythm

Taylor continued his solid performance in the second quarter, with Real Madrid able to play their game and Panathinaikos unable to find rhythm and keep up (29-15). Bentil brought some energy on the court for Panathinaikos, grabbed some big rebounds and scored a few points for his team, while Zach Auguste was the main scoring source for the guests. Causeur was firing from the perimeter while Panathinaikos were missing their opportunities to score from outside the ark. Real Madrid didn’t struggle to control the rhythm of the first half and head to the locker rooms with a safe 22-point lead (49-27).

They were not going to give up

Panathinaikos came back from the locker rooms determined to fight for the game, play a more strong and solid defense and not let Real Madrid have an easy night on the court. The guests run a 7-0 score (49-34) and started becoming more competitive against Real Madrid. Little by little, Panathinaikos got back on the game, fighting for every rebound and every possession. The Greeks took the difference down to 11 points, playing great defense, stealing the ball and scoring some crucial baskets. It was all about the greens in this third quarter, with Real Madrid losing Jaycee Carroll due to an ankle injury and Panathinaikos ending the quarter trailing by 14 points (64-50).

Panathinaikos had their last chance in the match to come back and put Real Madrid into some trouble. The guests scored consecutive baskets bringing Real’s lead to just 5 points, making the game a fun to watch one (66-61). Panathinaikos started feeling more confident against Madrid, used their fouls wisely, run the court and scored big buckets. Abalde hit the big three for Madrid to end Panathinaikos’ run and give a breath of fresh air to his team right when they needed it the most (69-61). Llull completed a six-point sun for Real Madrid extending his team’s lead, three minutes before the end of the match. Real Madrid stayed concentrated, played with the clock and the time remaining and got another big yet tough win (76-66). 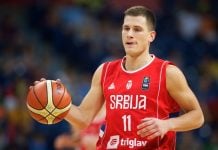