Udonis Haslem will return to the Miami Heat for the 18th consecutive season with the organization. The veteran big was re-signed on a one-year deal.

As a result, Pat Riley expressed his opinion on Haslem’s importance to the Heat as a team and an NBA franchise providing mentorship to the younger players and leadership for the team.

(per Ira Winderman of Sun Sentinel):

“His role is so critical for our team. Besides being able to still play, UD keeps everyone together in the locker room and on the road, teaching and mentoring. I think it’s a role he really loves and we are glad he decided to come back.”

Haslem has won three NBA titles with Miami on 2006, 2012 and 2013. At the same time, he holds the longest active streak of any player when it comes to consecutive seasons on the same team with 17.

He has played 858 NBA games during his 17-year career having career averages of 7.6 points and 6.7 rebounds per game. The NBA finalists are hoping to add one more title to their collection, as they got to the 2020 NBA Finals the previous season.

Bam Adebayo hits buzzer-beating three off the board to end 3rd quarter vs. Nets

Bam Adebayo on his career night: “40 don’t mean nothing unless you get the W” 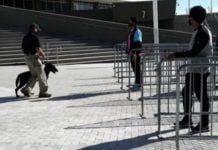 The most important things that each bookmaker should have if you...