The Miami Heat announced Bam Adebayo’s five-year contract extension and president Pat Riley was more than happy to talk about the confidence he has on the All-Star center.

“One of the most important things a franchise can do is to make sure that your best, youngest, cornerstone players sign on the dotted line. Getting Bam his extension was a no-brainer for us because we know he will be around for years to come.”

The NBA finalists sign this year’s first-time All-Star to a five-year deal worth $163 million. The high-flying center made some great strides the previous season averaging 15.2 points, 10.2 rebounds and 5.1 assists per contest.

He was a crucial part of the Heat’s success the previous season, as he was a two-way menace during the regular season and postseason.

The Kentucky product amped up his performance in the playoffs as he recorded averages of 17.8 points, 10.3 rebounds and 4.4 assists in 19 games. 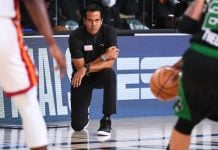