JaJuan Johnson has turned into a veteran presence in European basketball.

Having been been overseas since 2013, he got to play in Italy, Turkey and Russia over a span of seven years. Undoubtedly, his highlight was lifting the 2018 Eurocup title with a Darussafaka team led by former Cavaliers coach David Blatt, in addition to being included in the All-competition Second Team.

A Purdue University product, Johnson established himself as a force to be reckoned with. The same can also be said about his current team, FC Bayern Munich. After a slow start in preseason games and a home defeat to Armani Milan, the German side took the best out of powerhouses like Maccabi Tel Aviv and Fenerbahce, not to mention country rivals Alba Berlin. Standing at 3-1 after four Euroleague games, Bayern has the outlook of the ultimate team to beat right now.

Before becoming a rookie in Europe’s premier competition, the Indianapolis-born forward got drafted by the New Jersey Nets with the 27th pick in the 2011 NBA draft. However, the Nets had other plans for him and Johnson moved to Boston. At the Celtics, a team full of HOF players way past their prime (Pierce, Garnett, Allen) that eventually reached the Eastern Conference semifinals, coach Doc Rivers used him in no more than 36 games throughout the course of the 2011–2012 season. Scoring 3.2 points in an average playing time of 8.3 minutes was not what he hoped for. As a result, right after he concluded his presence in the 2012 Summer League, the Celtics traded him to the Houston Rockets.

The 6’10” tweener spent the next season between three NBA Development League teams. His numbers were good, but the NBA doors did not re-open. Europe provided a variety of opportunities and JaJuan Johnson was eager to explore them. Now, at 31, he is squaring off against the best in the continent and would consider an NBA return only on the condition of a guaranteed contract.

“I have a solid reputation in Europe and it would really have to be worth my while at this point“, Johnson told TalkBasket.net in an interview that revolved around his time and experiences on both ends of the basketball spectrum.

Q: I’d like your take on the recent developments in the Euroleague. Five games were supended this week and special regulations were modified to ensure that games will have more chances of being played and not forfeited. What do you think?

A: Right now, it’s an unprecedented situation that we’re going through. It’s going to take a lot of trial and error. Cities at risk may be taking proper precautions and tests, but when you travel there you can’t help but to interact with so many different people. So, I don’t know if there is an alternative; maybe a different arena or country where the situation would be a little safer. Obviously, there’s still work to be done. Since everyone is in different countries, regulations and rules, it’s hard to get them all on the same page.

Q: Are you optimistic about the Euroleague being played to the end?

A: I’m hopeful. If they find some different sites that are safer, they can get it to continue. But it’s hard to ask anyone to go to places that are at risk. Safety is the No.1 concern to everyone. Players have families and homes to go to.

Q: Bayern Munich is having a great season start, despite some poor performances in preseason. Three road wins in four Euroleague games is an impressive tally. How is that to explain?

A: It comes down to players giving it their all every day in practice, buying into what the coach says on a daily basis and focusing on defense. Coach Trinchieri asks focus, defense and proper execution. Everything will take care of itself then.

Q: Last summer, Bayern assembled a roster with a lot of athleticism: Wade Baldwin, Jalen Reynolds, Malcolm Thomas came in. Do you think all four of you got things to prove on the Euroleague level?

A: Definitely. This is my first experience. Jalen hasn’t had a lot of opportunities, Wade as well coming from last season, Malcolm too. We all have something that we want to give to the team and show that we can play at a high level.

Q: How did you become a Euroleague rookie at the age of 31?

A: Honestly, I had a lot of interest and offers along the years. But financially for me it just didn’t make sense at the time. Now, this is a different year with COVID. It was always a goal of mine to play at the Euroleague. So, it definitely comes as an adjustment, but it’s a good challenge for me and I’m trying to embrace it.

Q: How is Euroleague basketball so far for you?

A: It’s going pretty well. It’s definitely more tactical basketball. That’s the biggest difference from Eurocup and other competitions. The talent level is higher. But I’ve played against a lot of these Euroleague teams. So, there’s nothing I didn’t expect. Obviously, everyone is great players at this level. Each possession counts and that’s the biggest thing. The travel is also a little bit easier in Euroleague because sometimes in Eurocup you take long bus rides to get to different cities.

Q: You’ve said that David Logan was your connection when you first came to Europe in 2013. Who talked you into Bayern Munich?

A: I had some great conversations with coach Trinchieri before signing. I also had a few friends that had played under him and gave me the rundown on what to expect. They promptly said: “He’ll give you some freedom, you guys will definitely compete in practice”, which I don’t mind. He’s demanding, but that’s what I want for myself.

Q: What was so special about the Darussafaka team that won the Eurocup title in 2018?

A: That has been my biggest achievement in Europe. Everyone got along with everybody on and off the court. We adapted to our roles and knew what to expect. Our coach (David Blatt) was really big on defense each and every day. I see a lot of similarities so far with Bayern, even though it’s early. We emphasize defense and everyone has bought into the system. We believed in each other and that’s why we had success.

Q: Although you’ve said that you enjoy being overseas, do you feel more mature now to pursue the NBA dream? Does it depend only on you being offered a guaranteed contract or are there any other factors?

A: Obviously, it’s a dream. But I believe that at this point it has to make sense. It would have to be a great opportunity, almost on the lines of a guaranteed contract. I have a solid reputation in Europe and it would really have to be worth my while at this point.

A: I just really had believed in my team in college. I felt like I had some unfinished business. The first time I did it was to put my feet in, compare myself to others to see where I was at. The following year, I was really close to deciding. But with the way our season ended, I thought I should finish it out with the guys I came in with. I wanted to get my degree. Looking back on it, I feel like I improved my stock that year and it worked out how it was supposed to.

Q: Does listening to people talk about the Celtics making a mistake in choosing you over Jimmy Butler in 2011 bother you?

A: No, not at all. After all, I didn’t ask to be drafted or anything like that ! (laughs) For me, he’s having a great career. He’s a great player and he deserves everything that he’s got. Even before me, there was a lot of teams that passed up on him, besides the Celtics. There’s different ways you can look at it. I was drafted by New Jersey and then got traded there. So, there’s a lot that goes into.

Q: Butler himself said that it made perfect sense back then because you had “a tremendous college career”. Do you think that had you not gone to Boston, you could still be playing in the NBA?

A: Possibly, yeah. I’ve had a lot of time over the years to think about that, but maybe I had to mature even more. At the time, it was hard to play behind veteran guys. Situations like that pretty much solidified this status in the NBA. You just never know what can happen. It’s kind of tough to say that now, honestly.

Q: Being compared to Kevin Garnett in terms of body type and shooting ability, has helped or hindered your career so far?

A: I don’t think it did anything honestly. KG was always someone that I looked up to and I enjoyed watch him play. I wasn’t trying to play like him and the comparisons never got to me. I always looked at the similarities that we have in terms of size and built, but I didn’t take it the wrong way.

Q: How was your relationship? What did you learn from him?

A: It was great. I sat next to him on the plane almost every day. When we were travelling, he would speak about the consistency and the work ethic that he put every day. He didn’t have to do a lot; he just had his routine and stuck with it. That was the biggest thing that I learned.

Q: At the Celtics, you had both Doc Rivers and Tyronn Lue as your head coach and Summer League coach respectively. How did you get along?

A: They were both great. Doc was a good coach and mentor to me. He was also part of the reason I think I got traded there. Ty Lue is definitely a players’ coach because a lot of them get along with him. Then, he was younger, a diferent voice and it worked for him as well.

Q: Coach Rivers said back in 2012 that you not playing much had nothing to do with talent, but it was related to the mental makeup. Did you feel the same?

A: A little bit. I knew it wasn’t a talent issue, but different circumstances got in the way. I definitely believe it.

Q: After participating in the Summer League with the Celtics in 2012, were you surprised at getting traded to Houston almost immediately?

A: It was definitely shocking because it showed me that’s how the business is. I understood it because they were trying to make that last push at a championship back then. But it was tough and I was hurt for a minute. Now, I’ve learned that it’s part of the business and that’s how it goes.

Q: Did you watch the NBA playoffs?

A: I did, a little bit. Actually, I watched some of the finals. I wanted the Lakers to win and I was happy for LeBron to get another title. 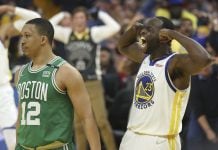