With no clear-cut pick in the ‘upper floors’ of the draft boards, NBA teams could go with the safest options in the 2020 NBA Draft.

One of those options could be former Memphis center James Wiseman, who is considered one of the safest picks in the draft, as stated by several NBA executives, per Sam Vecenie of The Athletic.

Having talked to sources who have seen Wiseman work out in Miami, there is some real enthusiasm about his play. He’s looked dominant in workouts and in the runs with other high-level NBA Draft prospects. A lot of executives I’ve spoken with actually consider Wiseman to be among the safer players in the draft.

Wiseman arrived at the University of Memphis as a highly-touted recruit. He played three games in the NCAA, before dealing with eligibility issues. 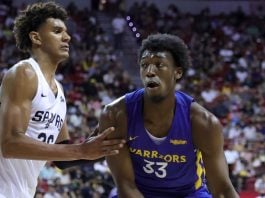 James Wiseman reacts to his first game since knee injury

James Wiseman plans to play for Warriors in Summer League on...