With the MVP of the NBA, Giannis Antetokounmpo and his brother Thanasis, watching, and after an exciting game with a lot of intensity, San Pablo Burgos is the new Basketball Champions League champion! After defeating AEK Athens, 85-74, Burgos is leaving Athens with the first European trophy in their history. Burgos’ defense was the key in this exciting final. In the second half, they played great defense, leaving AEK without a plan B.

Thaddus McFadden was named the MVP of the Final 8 and was the top scorer for Burgos with 18 points. Omar Cook added 15 for Burgos. For AEK, Keith Langford and Tyrese Rice had 11 and 17 points, respectively.

In the first quarter, AEK showed they were in control of the tempo of the game. Burgos was missing the threes while AEK was easily finding its way to the basket ending the first quarter leading by 10 (14-24). In the second quarter, we saw a different approach of the game from Burgos managing to cover AEK’s 10-point lead. AEK’s offense was not as efficient as in the first quarter and Burgos took advantage of it along with a 13-point lead at the end of the first half (49-36).

With AEK seeing Marcus Slaughter getting injured in the beginning of the second half and Burgos confident after their comeback in the first half, both teams were trying to focus on their initial game plan and put pressure on the opposite side. Burgos fought for every single ball, made a lot and tough three-point shots and ended the third quarter leading by 19 points!

Ten minutes before the end of the game, AEK had a very difficult task; to cover Burgos’ 19-point lead and make their last effort for a comeback. AEK managed to cover 10 out of the 19 points that they had to, putting extra, full court pressure to Burgos. Despite their defensive effort, three unsuccessful offensive efforts from AEK gave Burgos the opportunity to score and secure the win. 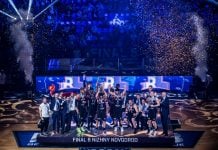 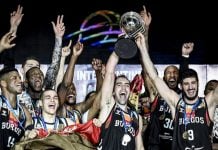 JaVale McGee on constantly being on Shaqtin’ A Fool: “It was...

Blake Griffin & JJ Redick on what happened to the Clippers