McMillan isn’t bitter about his exit, but he was somewhat confused after he recently signed a one-year contract extention.

“I thought about it and said, ‘Even though we hadn’t started the playoffs, I really thought at the time we were going to advance,'” McMillan said. “I had all my players (except Jeremy Lamb). Domas was there. I always thought Victor [Oladipo] was going to play. We had everybody and I really thought we could get out of the first round. So I signed that extension thinking, ‘OK, next year we’ll be healthy and I’ll give it one more try.'”

McMillan continued, “And then we get down to the bubble and Domas has his injury and it was like, ‘Ohhhhh-kay.’ But I know what I said to myself and told the organization, for me, it was about getting out of the first round, so when the decision was made yesterday, I understood.”

The 56-year-old was fired on Aug. 26 after four seasons as the Pacers head coach. 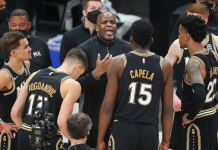 Nate McMillan: “Our offense right now is out of sync and that’s leading to really no defense at all” Trae Young: “I think Nate has done a great job of putting confidence in everybody”