The Chicago Bulls will eventually part ways with current head coach Jim Boylen and they are expected to make a thorough search around the league for possible replacements.

As a result, the Bulls could have an interest in the Toronto Raptors’ assistant coach Adrian Griffin, per the Chicago Sun-Times.

Griffin has served two seasons as an assistant coach for the Raptors, making stops in Milwaukee, Chicago, Orlando and Oklahoma City before arriving in Toronto in 2018. Before getting into coaching, Griffin played in the NBA for 10 seasons.

The Bulls are among the 8 teams that they are going to play again in December, having no hope to enter the postseason due to their record during the 22-team resumption plan.

The unprecedented situation in the league gave the franchise’s new president of basketball operations Arturas Karnisovas the chance to start early the reshape of the culture in the Bulls association. 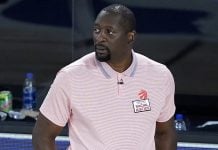 Billy Donovan admits 2022-23 season should be harder for Bulls because ‘a lot of people were uncertain of what our team would look like’...

Brian Windhorst on the Bulls’ future