With the negociations being in a very advanced state the 21-year old Montenegrin forward Vladimir Dasic will most likely be the player to complete the roster of Real Madrid.


Spanish sources are talking of a five year deal, with Real having to pay some buyout to the player's current club Buducnost Podgorica (rumors say about 500.000 euro), as Dasic still has one year left in his contract.

With Buducnost, 208cm tall Dasic averaged 12.3 points and 8.3 rebounds in last season's edition of the Eurocup. 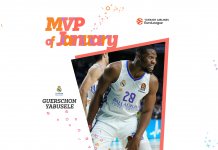