The beef between Damian Lillard and Patrick Beverley stems from a couple of years ago when the two players had an exchange on social media.

The two point guards got into it during the game between the Lakers and Trail Blazers. As Lillard was about to shoot a free-throw, Beverley started chirping to him.

Portland’s star replied by saying “I’ll beat your ass.” Beverley received a technical foul for the altercation. The Trail Blazers increased their lead to 25 points, but was Los Angeles that got the win. 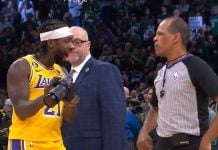