Pelicans star CJ McCollum ended his shooting slump with a 30-point performance against the Grizzlies. The 31-year-old point guard 54% of his three-pointers 49% of his field goals.

McCollum’s shooting percentages this season are the worst of his career so far with 27.9% and 39.1% respectively. The player was honest when describing his shooting slump.

Via Christian Clark of nola.com:

“I’ve been playing like s***,” McCollum said. “I’ve been feeling like s***. I have been shooting the ball really poorly, which is uncharacteristic. I’m normally not good at the other things, but I can always shoot. That was frustrating: not being able to help my team the way I wanted to but not having the energy.”

This season McCollum is averaging 17.8 points, 5.5 rebounds and 6.3 assists in 35.9 minutes per game for New Orleans. CJ McCollum: Celtics have a hunger to get back to the Finals 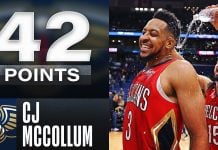 Willy Hernangomez on CJ McCollum: “He’s been really getting his rhythm back” CJ McCollum on Western Conference: “I think it’s Golden State and the rest of us”