Bjelica was presented the trophy for the top performer of the season by Ronny Nessim, Regional Manager at bwin.party digital entertainment, at the EFES Euroleague Awards Ceremony, one of the first official acts of the Final Four, at Casa de Correos on Thursday.

The versatile forward, who was previously announced as a 2014-15 All-Euroleague First Team member, received more votes than any other player during the selection process. Euroleague Basketball conducted the voting among journalists and fans. Bjelica, who turned 27 last week, ranked fourth in the league in average performance index rating, but his 18.3 index rating was best among players on winning teams. It was the best season of Bjelica’s career as he helped Fenerbahce reach its first ever Final Four.

“I want to thank everybody who chose me for this and to my family for supporting me all these years,” he said after receiving the trophy. “This is a historic moment for my club and team, Fenerbahce Ulker. I also want to thank my teammates and coaches and everybody at Fenerbahce Ulker who made this happen. It really is a big honor and means a lot to me.”

Bjelica was a big and consistent presence for Fenerbahce all over the court this season. He was a force on defense, a dominant rebounder, an efficient scorer and a true team player, whose combination of size, speed and skill made him a constant mismatch and a challenge for opposing teams to contain.

Bjelica was the season’s second-best rebounder with 8.6 rebounds per game.  Though his defensive prowess cannot be measured by stats, Euroleague coaches recognized his contributions by making Bjelica one of the top vote-getters for the Euroleague Best Defender Trophy.

Over the course of the season, Bjelica did not miss a single game and led the team in performance index rating, rebounding and steals (1.2 spg.), ranked second in scoring (11.9 ppg.), blocks (0.7 bpg.) and fouls drawn (3.2), and was third in minutes played (27:43) and three-pointers made (24). In fact, only one player taller than Bjelica’s 2.09 meters made more three-pointers than the Fenerbahce forward this season.

Not only did Bjelica step up for Fenerbahce from the start of the season, he got better as the games got more important. After assuming a role of a permanent starter four weeks into the Top 16, he scored in double figures 10 consecutive contests during this key stretch of the season, and in each game during Fenerbahce’s nine-game winning streak in the Top 16. He earned the bwin MVP award for March, a month during which he averaged 15.0 points, 9.0 rebounds and 3.0 assists per game. For the season, he amassed a total of eight double-doubles, three of which came during the winning run that secured Fenerbahce an all-important home-court advantage in the playoffs.

He then continued with his contributions in a sweep of a defending champion Maccabi Electra Tel Aviv. Bjelica pulled down 33 rebounds in the three-game series; his average of 11 rebounds per game was the most in a playoff series in competition history and his 4.3 offensive rebounds per game were the best playoffs average in the last eight years. Only three other players in playoffs history grabbed more than his 15 boards in a crucial Game 2 victory.

A native of Serbia, Bjelica is the tenth different player chosen as season MVP since the current award format was put in place. Bjelica is in his second season with Fenerbahce. He started his professional career with Traiskirchen in Austria before returning home to play for Crvena Zvezda Telekom Belgrade. From there he went to Caja Laboral – today Laboral Kutxa Vitoria – and spent three seasons there before moving to Istanbul where Bjelica continued blossoming into one of the most versatile players on the continent and helped Fenerbahce reach historic heights while earning himself the Euroleague’s most prestigious individual accolade.

Euroleague MVPs (since current awards format was put in place) 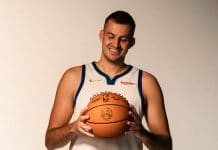 Draymond Green praises new teammate Nemanja Bjelica: ‘I didn’t know he could make plays like that’