When it was announced that Kevin Durant requested a trade from the Nets, the whole NBA was shaken. Soon after that his top two destinations were reported – the Suns and the Heat.

Phoenix head coach Monty Williams revealed his initial reaction to learning the rumors linking KD and his team. It was shocking to him, but at the same time he wondered what the Suns would have to give up in return for the two-time NBA champion.

“I never talked to any of our guys about that,” Williams said on SiriusXM NBA Radio. “One, people don’t understand how hard trades are to pull off. When I first heard about the Kevin Durant stuff, I was kind of blown away by it, just because we’ve been so blessed here to have guys who want to come.

“At the same time ‘at the expense of what?’ was my thinking. I like our team, I love our guys. I wasn’t going to have conversations that didn’t need to be had. I think our guys are mature enough to understand that part of our business.

“So I didn’t want to have conversations about stuff that didn’t need to be brought up. Part of it is because I’ve been in the business so long. It’s just hard to pull trades off. That was my thinking.” 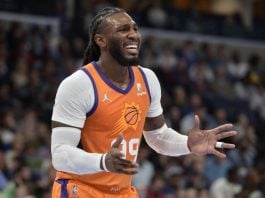