Amid recovery, Murray is still being slated by the club to enter with them at the start of the next season’s training camp.

The fourth overall pick of the 2022 NBA Draft, Murray had a solid second year off from Iowa Hawkeyes, flirting with a sophomore average of 23.5 points, 8.7 boards, 1.5 assists, 1.9 blocks in 55.4 shooting percentage from the field and winning the Karl Malone award – a testament of being the best power forward in the Division 1’s men’s basketball last collegiate campaign.

He was named as this year’s Summer League MVP after compiling tournament numbers of 23.3 points, 7.3 boards, 2.0 dimes, and 1.3 steals in four games. 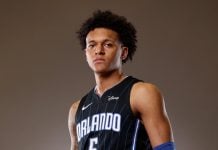