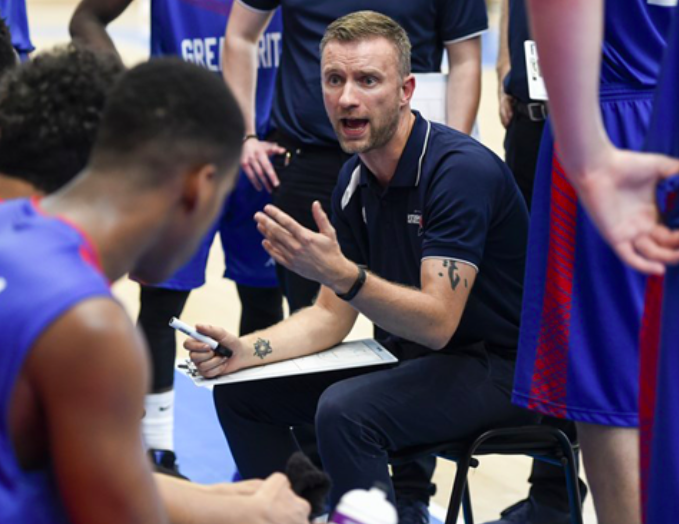 It was 36 hours before London Lions faced Surrey Scorchers in the British Basketball League Cup opener and Barking Abbey coach James Vear was viewing an apartment with his partner when his phone rang.

Barking Abbey, who form London Lions’ National League side were asked to play that game in Surrey instead of the senior team, who were in isolation due to Covid-19 protocols.

“When I found out that we were playing, I kind of switched off viewing the flat and immediately went into basketball mode, as we had 36 hours to prepare for a game,” Vear recalls.

The Barking Abbey coach managed to get some game film on Surrey, notify his players and get them up to speed on the task at hand.

“We called a team meeting and told the guys they were playing,” Vear says. “I could see how excited they were and maybe only having a short preparation time helped because they didn’t get nervous.”

And on game night, for one night only, Barking Abbey London Lions II, disguised as the senior men’s team pulled off one of the BBL’s greatest upsets as they defeated the Scorchers 86-85.

Jase Harrison led the “Lions” with 24 points and 17-year-old Zamoku Welche added 19. It was the latter whose free throws with a second left sealed the win.

But it was the mature attitude and professionalism from a team, comprised mainly of 17-18–year-olds that impressed Vear the most, along with Lions senior head coach Vince Macaulay, who was also on the bench but as an assistant.

“You could see in the player’s eyes and how they were that this was their chance to shine,” Vear said.

“They knew that this was their big opportunity and you saw the excitement, the nerves but at the same time, the eagerness to get on that court and show everyone what they’re about.”

And having Macaulay on the bench helped the cause further. Assisting the Barking Abbey playcaller and guiding him as Vear coached a BBL game.

“Since the merger between Lions and Barking Abbey, me and Vince speak a lot,” Vear commented.

“He wanted to be there, but at the same time, he knew that this was my group of guys and he just wanted to help me in an assistant coach capacity, prepare for Surrey, and when it comes to the BBL and Surrey Scorchers, Vince knows his stuff.”

On the court, Barking Abbey played with the heart of a lion, matching their established counterparts, play for play, answering Surrey’s scoring bursts with runs of their own.

Eventually it looked like the young Lions were about to run out of steam as Surrey raced into an 11-point lead with five minutes left. The plays were getting sloppy and the hosts were executing theirs.

However, Barking Abbey dug deep and answered with a 10-0 run to set up the grandstand finish that led to 17-year-old Welche’s game-winning free throws.

“We were happy, of course,” Vear said.

“But for Jase [Harrison] and Bradley [Kaboza], who are our senior guys, they stood and said to everyone in the locker room that we got the big win here, but this is how we play now. This is the standard that we have set for ourselves going forward and we can’t stop now.”

For Macaulay, he benefitted as his Lions squad begin the BBL Cup with a 1-0 record. For Vear, he benefitted as he led his kids to one of the true BBL giant-killings, which fills them with tremendous confidence for the season ahead.

For now though, Vear faces his greatest challenge: Going back to the drawing board to find an apartment.