Toronto Raptors president Masai Ujiri admitted it was tough to see Kyle Lowry leaving the franchise for the Miami Heat. The Heat acquired the veteran guard via sign-and-trade.

Lowry signed a three-year, $85 million deal with Miami to pair up with Jimmy Butler. Ujiri said the former Raptors’ leader is in good hands; however it was tough to part ways with him.

“It’s been really tough for us to see a player as incredible as that go,” Ujiri said of Lowry, per Aaron Rose of Sports Illustrated.

“We wish him all the best where he is. He’s in great hands in Miami with that organization. … We just hope we beat them four times a year and we’ll be good that way,” the exec added.

Lowry’s departure was expected during the 2021 trade deadline, with several contending teams being interested in the veteran guard. However, the Raptors did not agree to any offer.

Now, after several ups and downs last season, Lowry is hoping to become part of a championship run with the Miami Heat next year. 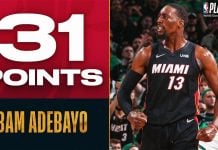