Oklahoma City Thunder veteran big man Al Horford will no longer be active for the final 28 games this season, according to Adrian Wojnarowski.

The Thunder are turning to their younger players in their nightly rotations as they look toward the future with 12 players under the age of 25.

Horford, 34, plans to remain with his Thunder teammates and train at the team’s facility, notes Wojnarowski.

After the season, Horford will have two years, $53 million left on his contract.

General manager Sam Presti has pledged to work with Horford and his agent Jason Glushon on finding a destination that fits better with this stage of his career, per Wojnarowski.

Horford has been considered “a significant presence and influence on the Thunder’s young, rebuilding roster, and the organization was eager for Horford to remain among them as the two sides worked through this decision,” sources told Wojnarowski.

It was clear that the Thunder would eventually shut down Horford, but once Shai Gilgeous-Alexander was ruled out for the foreseeable future due to plantar fasciitis, this “expedited” that timeline.

The Thunder have a projected 34 draft picks over the next seven years until 2027 with 17 first round picks and 17 second round picks.

Horford finishes the season with averages of 14.2 points, 6.7 rebounds and 3.4 assists per game, while shooting 45.0 percent from the field and 36.8 percent from three-point. 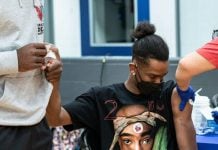 Dwyane Wade on Derrick Rose’s impact on Knicks’ success: “If you...