Adam Silver has defended the decision to have the NBA host an All-Star Game this year.

The league officially announced its plans for the event on Thursday, noting it will be held in Atlanta on March 7. The one-night affair will see the Skills Challenge, Three-Point Contest, Slam Dunk Contest and the game itself all played out.

NBA players such as LeBron James and Giannis Antetokounmpo have said they aren’t looking forward to the ASG this year given the status quo. However, speaking to Rachel Nichols on The Jump, Commissioner Silver claimed to have weighed all of the issues and determined that hosting the event is the best way forward.

“So I certainly hear the other side of this issue here. And I’ll lastly say it seems like no decisions during this pandemic come without uncertainty and come without risk. This is yet another one of them and, yet, it’s my job to balance all those interests, and ultimately it feels like the right thing to do to go forward.”

In addition to revealing plans for March 7, the NBA’s statement highlighted a partnership with the NBPA to pledge upward of $2.5 million, in both funds and resources, to historically Black colleges and universities. 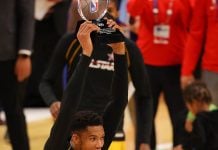 Dennis Schroder denies ever getting $84 million offer from the Lakers