LeBron James reacted to Anthony Davis hitting a big-time three-pointer late in the fourth quarter of Game 4 of the NBA Finals, which helped the Lakers seal the win.

“He’s a big shot maker. In the shot clock, early in the shot clock, fourth quarter, first quarter, everything in between. It was just a great setup by Doe [Rajon Rondo]. First possession before that Doe was able to fake it like he was going to him, carry himself to the lane, get the layup.

“And then the very next possession he was able to find him AD just kind of stared at the shot clock and it was late in the shot clock. And obviously he trusted the shot that he works on consistently. Big-time shot, big-time play for our team to be able to put the game away,” James recalled the play that led to AD’s three-pointer. 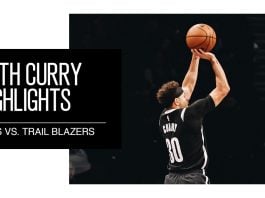