“That’s what he does. He’s probably the best rebounding guard in the league. When the ball goes up, if you stand and stare, that’s gonna be a problem. If you turn and check, there’s gotta be a physicality to it. He’s got a great nose for the ball. He anticipates well. Strong. We knew that would be a challenge.” 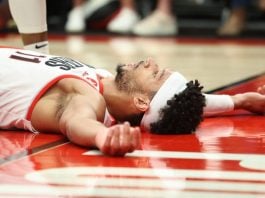