CSKA Moscow are aware of the pressure facing them when their quest for a seventh Euroleague crown begins tomorrow against Olympiacos but coach Ettore Messina is hopeful that the bad luck would have gone from last year’s bitter loss to the Greek league leaders.

The Russians, then coached by Jonas Kazlauskas squandered a 19-point lead, losing to Olympiacos 62-61 in the Euroleague championship game in Istanbul. A result that Messina wants turned around.

“I hope all the bad luck went to CSKA last year and this year we just get a little bit of good luck,” said Messina, appearing in his ninth Final Four.

“The first time I signed for CSKA in 2005, I arrived in a similar situation. The club had just lost in the Final Four in Moscow. Both times I came after disappointments. I was not completely aware of the pain the club had suffered, I could just imagine.”

Much to their disappointment, last year is fresh on the mind of many members of the media present in London – one of the most memorable finals in recent memory has truly come back to haunt the Russian side – who are desperate to make amends.

Messina admits that even though the memory of Istanbul still lingers, it isn’t worth thinking or talking about it. Tomorrow night is a new game against a different Olympiacos side, saying that his side are looking ahead.

“Now, even now. It’s not the right thing to think about last year,” Messina said. “We need to show that we are mature, we are looking ahead and we will see on the floor tomorrow.”

A season on and CSKA changed their squad for this year. They lost their two lynchpins in Andrei Kirilenko and Alexey Shved to the bright lights of the NBA along with the retirement of Ramunas Siskauskas. But 2010 Euroleague MVP Milos Teodosic has stayed put and the Serbian international has relished his role as one of the leaders on the roster.

“Last year we had more experience compared to this year but we’re very confident,” Teodosic said. “ I’ve been comfortable in my role and I’ve enjoyed this Euroleague season. We are aware of the threats that Olympiacos bring, and I feel that our defence will be the difference. We’ve worked a lot on that recently and we aim to pressure them quickly.”

One of the main threats for Teodosic and the rest of the CSKA Moscow side will be the newly crowned Euroleague MVP Vassilis Spanoulis, a player that the Serb knows only too well.

“I’ve played against him [Spanoulis] many times, he is a terrific player and very worthy of his award,” Teodosic said.

“I played against him last year in Turkey and we played really hard against each other. This year will no doubt be the same. He’s a terrific scorer but can influence the game other ways too, so me along with my team will be well prepared.”

CSKA Moscow and Olympiacos will begin Friday’s proceedings at the O2 Arena, tip-off at 18:00 CET. 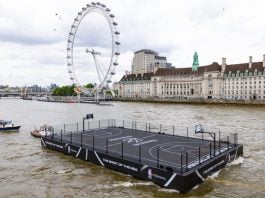