The Swedish Basketball Federation has said that they will be holding talks with star player Jonas Jerebko after he penned a short-term deal with CSKA Moscow.

Having been out of action since late 2021, Jerebko’s motive looks to be mainly down to his quest for playing time. But a move to Russia, who are currently at war with neighbouring Ukraine, has come as a shock to some, especially to General Secretary of the Swedish Basketball Federation (SBBF) Fredrik Joulamo.

“It is clear that the timing of this decision is surprising, to say the least. I need to talk to Jonas and listen to his thoughts,” Joulamo told Swedish outlet Aftonbladet.

“Our position is clear. We have run a fundraiser, condemned Russia’s invasion, and backed FIBA’s decision. But we are not involved in our players’ contracts. We will have to talk with Jonas to see what this means for him and us in the future.”

CSKA Moscow are now playing exclusively in the VTB League, having been suspended from the EuroLeague due to the country’s invasion of Ukraine.

The 35-year-old Jerebko has played twice for Sweden in the winter schedule of the 2021-22 season, helping his side split a home-and-away series opposite Croatia to make its way to an overall record of 2-2 in Group C of the 2023 FIBA World Cup Qualifiers.

The Swedes are currently level with Slovenia, sitting one game behind Finland and one game ahead of Croatia, with the top three teams going through to the next phase. 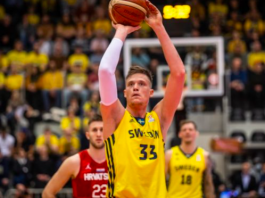