Domantas Sabonis is looking forward to the 2020 Olympic Qualifying Tournament and wants to lead Lithuania to the Olympic Games in Japan.

Here is what the power forward of the Indiana Pacers told FIBA:

“We’re all looking forward to it (the 2020 Olympic Qualifying Tournament). It’s going to be a very intense tournament as every team dreams about competing in Tokyo 2020.

It’s what we have to go through to qualify for the next Olympics, and we’re going to battle to win the tournament and get a ticket for Japan.

Playing at the Olympics is very, very important. It was one of our goals last summer, and despite having to go through to the qualifying tournament, we know we have the talent to qualify for Tokyo.

We don’t want to miss that tournament, we want to keep playing on the biggest stage every time there is an international tournament.”

Lithuania will host one of the four Olympic Qualifying Tournaments in Kaunas (June 23-28, 2020).

The draw will take place on November 27 and the seeds for the men’s and women’s tournaments have been revealed. 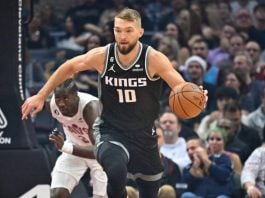 Domantas Sabonis on De’Aaron Fox: “He’s been clutch for us all...