The head coach of Serbia, Sasa Djordjevic, spoke with the media ahead of the matches against Greece (September 13) and Estonia (September 16) for the WC Qualifiers and praised the Sacramento Kings GM, Vlade Divac, for helping Bogdan Bogdanovic and Nemanja Bjelica join the national team.

Here is what the Serbian head coach said, per Basketball Sphere:

On Divac doing his best to help the national team: “Divac is exceptionally positive towards us, he understands our obligations. There are a few more details to be taken care of regarding Bogdanovic, but as far as Bjelica goes it’s done. Bogdanovic underwent a surgery at the end of the season, so we have to keep an eye, but Vlade is a man who remembers the problems he had while playing with NBA teams and he is exceptionally willing to help.

We’ve been in touch for the past three or four nights talking about it. I’m so glad both of them are on his team, because it will help them in their further careers.”

On Milos Teodosic, Boban Marjanovic and Nikola Jokic not playing for Serbia: “As the windows pile up, the less of us there are. I was optimistic in front of this window, when I put up the preliminary list, hoping the big names will be here, that they’ll receive permission from their clubs, that they won’t have any problems. But, unfortunately, some cancelled, some had to listen to their club’s opinion.

Actually, they didn’t have to but. That’s the case with Teodosic and Marjanovic, who won’t be present. We always talk about it, but it’s time to close the chapter and turn to our first obligation, the big match that awaits us against Greece.” 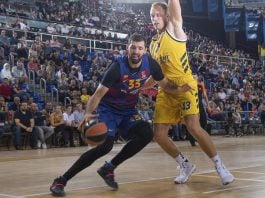 Harrison Barnes praises Vlade Divac for setting the Kings up for...

Joe Dumars reportedly not expected to be a long-term solution in...