Luka Doncic could be suspended for the Mavericks season ender after receiving his 16th technical foul in the blowout win against the Trail Blazers.

The Slovenian superstar scored game-high 39 points as Dallas recorded a 50-point win (128-78). The Mavs will face the Spurs in their final game of the regular season.

Jason Kidd’s team is still in fight for the third place in the Western Conference. They must beat San Antonio and hope for the Warriors to lose their remaining two games against the Spurs and Pelicans.

As far Luka’d suspension is concerned, it is not a big deal for Kidd. “I couldn’t see it. I was in the coach’s little circle figuring out who was going to be in the game. I can’t comment on what happened, what was said, I just heard that it was a T. We’ll see what happens,” he said.

“I didn’t ask [Luka] what he said. Everybody say he didn’t curse, so that’s all I can go on what they said. So that’s between Tony [Brothers] and himself. We’ll see what the league says. If the league doesn’t take it back, then it was his last game for the season. So he’ll get some rest to get ready for the playoffs.

“I didn’t even ask Tony. Tony was saying that he had to stop the complaining. That’s the interpretation of a ref trying to keep the game under control. I get it.

“It is what it is. It’s over with. We’ll get ready for San Antonio. If he can play, he plays. If he can’t, he moves on to the playoffs and starts with a new slate. It’s not a big deal.” 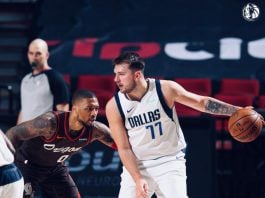