Lakers legend James Worthy gave his take on which players will start for the purple and gold alongside LeBron James, Anthony Davis and Russell Westbrook. The three-time NBA champion agreed with Chris McGee that those players will be DeAndre Jordan and Kent Bazemore as he expanded on the latter.

“There was talk of Nunn because Nunn has really strong upper body that he would start,” Worthy said on Spectrum SportsNet. “I think Bazemore has proven not only this preseason but with Golden State and the first time time he’s with the Lakers he didn’t have that maturity as he wanted yet.

“But I think he’s totally capable of being that starter. If I had to bet right now with the injuries that they have, I would bet he’d probably start.” 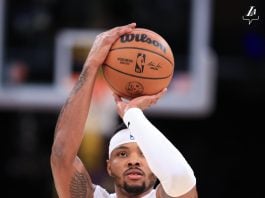