Conley also missed Game 1, as he recovers from a right hamstring strain.

The 33-year-old suffered the injury in the first half of Game 5 against the Memphis Grizzlies on June 2.

Without Conley in the lineup, the Jazz relied heavily on star Donovan Mitchell in Game 1, as he went off for 45 points on 16-of-30 shooting from the field and 6-of-15 from three-point.

Joe Ingles will continue to start in Conley’s place and have more of a playmaking role, as he finished Game 1 with seven assists.

Conley’s next chance to play comes in Game 3 on June 12. 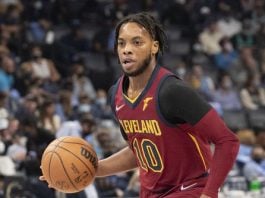 Mavericks reportedly ‘a team to watch’ for Mike Conley once he...