ALBA Berlin remained on the roll by beating Fenerbahce with a score of 89-63 in the Round 13 of the EuroLeague.

After not so ambitious start with a 1-5 the German team moved to 5-7 (the game from the Round 5 against Baskonia will be played on the 5th of January). Their latest victim was Igor Kokoškov’s squad which now has 5 wins and 8 defeats.

Without all injured players (Marcus Eriksson, Lorenz Brenneke, Simone Fontecchio, and Ben Lammers), ALBA forced Fenerbahce to make 20 turnovers and to be successful in 6 of 22 three-point attempts. Also, using offensive rebounds the German squad scored 17 points in the second chance while stopping Fenerbahce at 6 after grabbing rebounds in the offense.

On the other side, Tarik Biberović was the starter in the match for the second time in the season (the first time in the game against Barcelona). He used given minutes in the best possible way because the young forward was the only player with double-digit points. Biberović finished the match with 13. Leo Westerman was the only player in Fenerbahce with a double-digit PIR (12). The Frenchmen had 6 points and 4 assists. 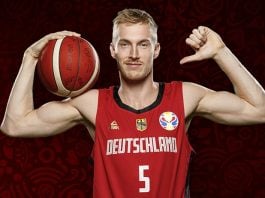