Basketball court is not the only place where basketball players tend to score. The guys at OnlineGambling.ca came up with a list of the Biggest Sporting Playboys which includes two NBA players.

The list was compiled using publicly available data such as news articles, publications and social media. Athletes on the list are ranked based on the number of relationships they had.

Tristan Thompson seen hanging out with women at Vegas club 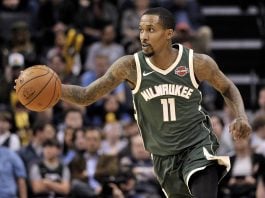 Brandon Jenning: “Bulls was playing great til they picked up Tristan...