The Athletic’s Tim Kawakami recently stated that the Golden State Warriors shooting guard Andrew Wiggins could be key to an eventual trade for the Milwaukee Bucks small forward Giannis Antetokounmpo.

Fox Sports analysts Nick Wright and Kevin Wildes are joined by Chris Broussard, who thinks the chances of Antetokounmpo joining the Golden State Warriors are slim to none: 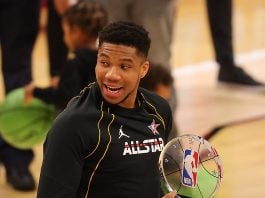