If the NBA returns, Mike D’Antoni would have no reservations about being on the Houston Rockets’ bench, despite being in a vulnerable age group for complications with coronavirus.

D’Antoni turns 69 on May 8 and his age increases the risk of severe illness or even death from the virus.

The primary reason he would coach is that he has confidence that NBA commissioner Adam Silver won’t allow games to be played if safety would be compromised, according to ESPN’s Tim MacMahon.

D’Antoni is the second oldest coach in the league behind San Antonio Spurs coach Gregg Popovich.

Two NBA general managers recently said that they had “major concerns” about older coaches and staffers being present at games due to the factors that place them at a higher risk.

The Centers for Disease Control and Prevention (CDC) has stated that adults over age 65 are at a higher risk of severe or fatal complications if they contract coronavirus. 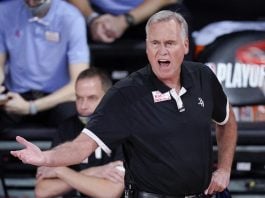