Atlanta Hawks forward Al Horford knows that he is in a race against time if he wants to play in the FIBA Americas, starting August 30 for the Dominican Republic in Venezuela.

The forward was in London, hosting an NBA 3X event in Docketts Common in north London over the weekend. But despite the enjoyment, and even being used as a body for a European acrobatic dunking crew, the off-season back in the USA and the Dominican Republic is weighing heavy on his mind.

Over in Santo Domingo, the Dominican Republic’s training camp is due to begin in the next two weeks with 27 players on the list, Horford’s name included. The Dominicans are housed in Group B, alongside Mexico, Argentina, Paraguay and the hosts themselves in the capital Caracas.

The Central American side, who came close to qualifying for their first ever Olympic Games, via the qualifiers last year in the same venue are already without Detroit Pistons’ Charlie Villanueva for this upcoming tournament.

“I still have to make that decision and I have a couple of weeks before practice starts, so I have to decide whether or not I’m going to be participating,” Horford admitted.

There was also the thought that Horford might not join up with the rest of the national squad due to Villanueva not participating, but Horford quickly confirmed that that wouldn’t be the case.

“It’s his contract year coming up and he understands that he needs to get prepared, to get better, get another contract and then liaise so it’s understandable,” Horford said of Villanueva who looks set to stay in the Motor City despite rumours that he would get waived.

Horford, who was part of the team last year that missed out on qualification saw encouraging signs back in the Olympic Qualifying Tournament, and knows that whatever squad is on the floor in August, it will be a competitive and united group.

“That was really tough, we wanted to be [there] in London, we wanted to be [there] in the Olympics, being one game away was hard,” Horford explained. “The encouraging thing for us was that our country has never been that far in that magnitude of tournament, so it was a very big honour for us to be in that position, and you look at it and yes, you want to get yourself back in that position, and that is a very big thing for your country.”

With the Hawks, Horford is currently in the second year of a four-year contract, worth a total of $48million, which works out at $12million a season. The Hawks are looking to build the squad around the forward this year with the loss of Josh Smith to the Detroit Pistons – and they have rebounded from Smith’s departure by signing Paul Millsap and re-signing shooter Kyle Korver.

Horford though knows that despite the reshaping of the side, they will still compete.

“It’s interesting,” he said. “We don’t have any particular roles, the main thing is we want to be able to be the type of team that competes and that we want to be able to get to the post-season. I know that our team has been dismantled and it’s going to be up to us to work really hard and put ourselves in a good position. Our goal is to make it to the playoffs and go from there.”

Marcus Smart on Al Horford: “He’s been that catalyst for us... 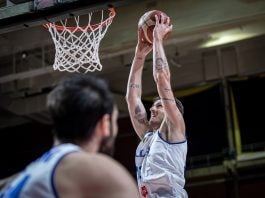