Olympiacos Piraeus great Vassilis Spanoulis added another milestone to the long list of his career achievements on Friday.

By accumulating a PIR of 17 in the victory, Spanoulis reached 3,900 for his career, surpassing the retired EuroLeague Basketball Legend Juan Carlos Navarro, who previously led the all-time rankings with a career PIR of 3,890.

Spanoulis reached the milestone in just 313 games, 28 fewer than Navarro’s 341.

Spanoulis, 37, is a three-time EuroLeague champion and Final Four MVP in 2009 with Panathinaikos Athens, as well as in 2012 and 2013 with Olympiacos. Spanoulis was also the season MVP for the 2012-13 campaign.

Playing in his 14th season in the competition, Spanoulis is EuroLeague’s career leader in assists with 1,457 and no player in the EuroLeague has made more free throws than his 1,070.

He also ranks second all-time with 4,101 points, behind only Navarro’s 4,152. He ranks third on the EuroLeague all-time list with 467 three-pointers made, five behind second-place Milos Teodosic. Navarro leads in triples with 623. 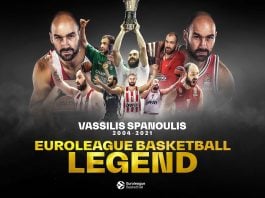