Tuesday’s action in the 2019 Basketball World Cup saw six more teams qualify for the second round of the tournament.

Team USA, Brazil, France, the Dominican Republic, Lithuania and Australia joined the six teams that secured their ticket to the Round of 16 on Monday (02/09).

In a late thriller that was decided in overtime, Team USA survived Turkey (93-92) and advanced to the round of 16.

The Turks had the opportunity to win the game (91-92), but they missed four straight free throws and Khris Middleton sealed the deal for the Americans from the free-throw line.

In the other match of the day, the Czech Republic rallied past Japan (76-89) and remained alive in the qualification battle.

The winner of the clash between Turkey and Czech Republic will follow Team USA to the second round. For its part, Japan was eliminated.

Kostas Sloukas missed the game-tying free throw at the buzzer and Greece suffered a painful defeat to Brazil (79-78).

Thanks to this win, the Brazilians clinched their spot to the second round, while the Greeks will play a do-or-die game against New Zealand on Thursday (05/09). The latter overpowered Montenegro (83-93) and will have to beat Greece to reach the Round of 16.

France and the Dominican Republic remained unbeaten in the competition (2-0) and qualified for the second round.

The French team crushed Jordan (64-103), while the Dominican Republic stunned Germany (68-70). Their match-up on Thursday will determine who will claim the top spot of the group.

For their part, Germany and Jordan will play in the classification games (17-32).

Australia and Lithuania are the two teams that qualified for the second round of the tournament.

The Australians earned the 81-68 victory over Senegal, while the Lithuanians dominated Canada (92-69).

The winner of Thursday’s battle between Australia and Lithuania will claim the first place in the group, whereas Canada and Senegal have been eliminated. 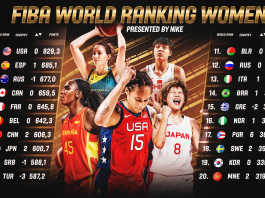 USA on top of FIBA World Ranking Women, as China and...