The 34-year-old former NBA player Chris Bosh is hoping to make a return to NBA.

About the possibility to be a basketball player again, a 11-time NBA All-Star spoke to media during the Knicks and the Wizards preseason game on Monday. Bosh said, he is ready to play in any team and will make a decision about returning till NBA All-Star weekend.

Last time Chris Bosh played in 2015-2016 season. He stopped his basketball career due to blood clots. During his 13 year in the league a two-time NBA champion was averaging 19.2 points, 8.5 rebounds and 2.0 assists per game, while shooting at 49.4 percent from the floor. 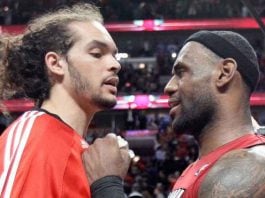